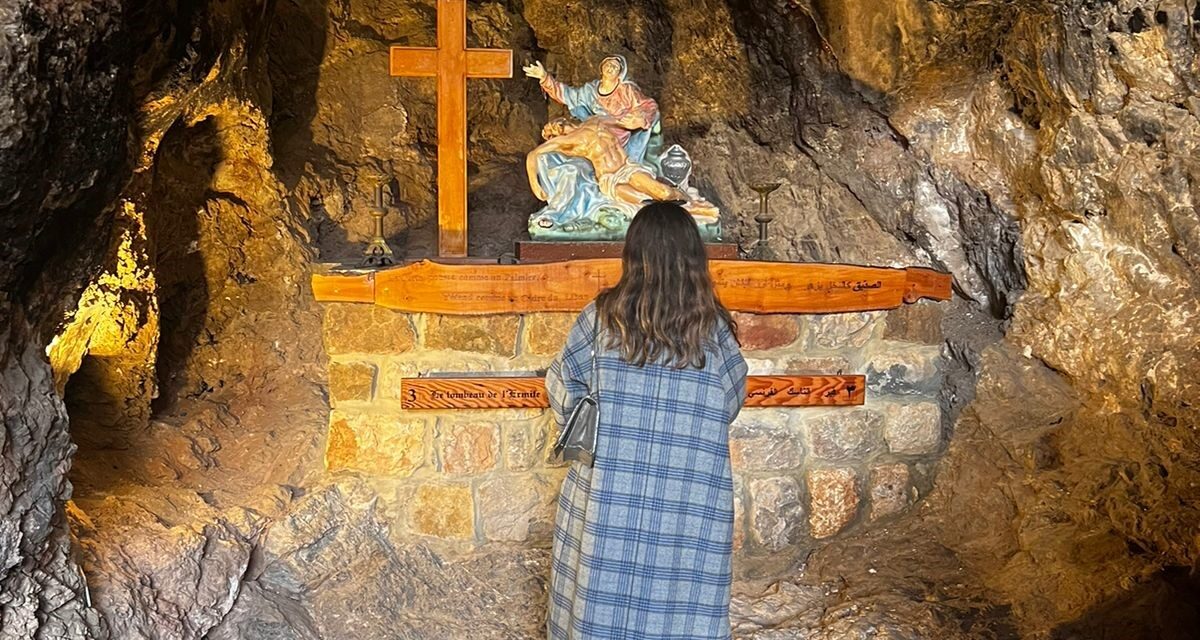 Once upon a time there she stood, a most beautiful creation on planet earth. She was vibrant and magnificent, endlessly generous with her giving’s, she welcomed the world into her motherly heart. The whole world was in love with her, admired her, yearned for her blessings and her unconditional love. And she was happy, blissful, in a state of perfect being and unity. Then came a day when a darkness clouded over her light like a serpent’s poison, and she was stripped of everything dear to her. One day, she was the most vibrant star in the night’s sky, and the next, she lay bare and helpless, her dignity, her respect, her love, her light…all torn from her as a baby cub is torn from its mother. She was left with nothing, and she could see nothing but darkness. My sweet Lebanon, your wounds I felt so deeply, as I am you and you are me. 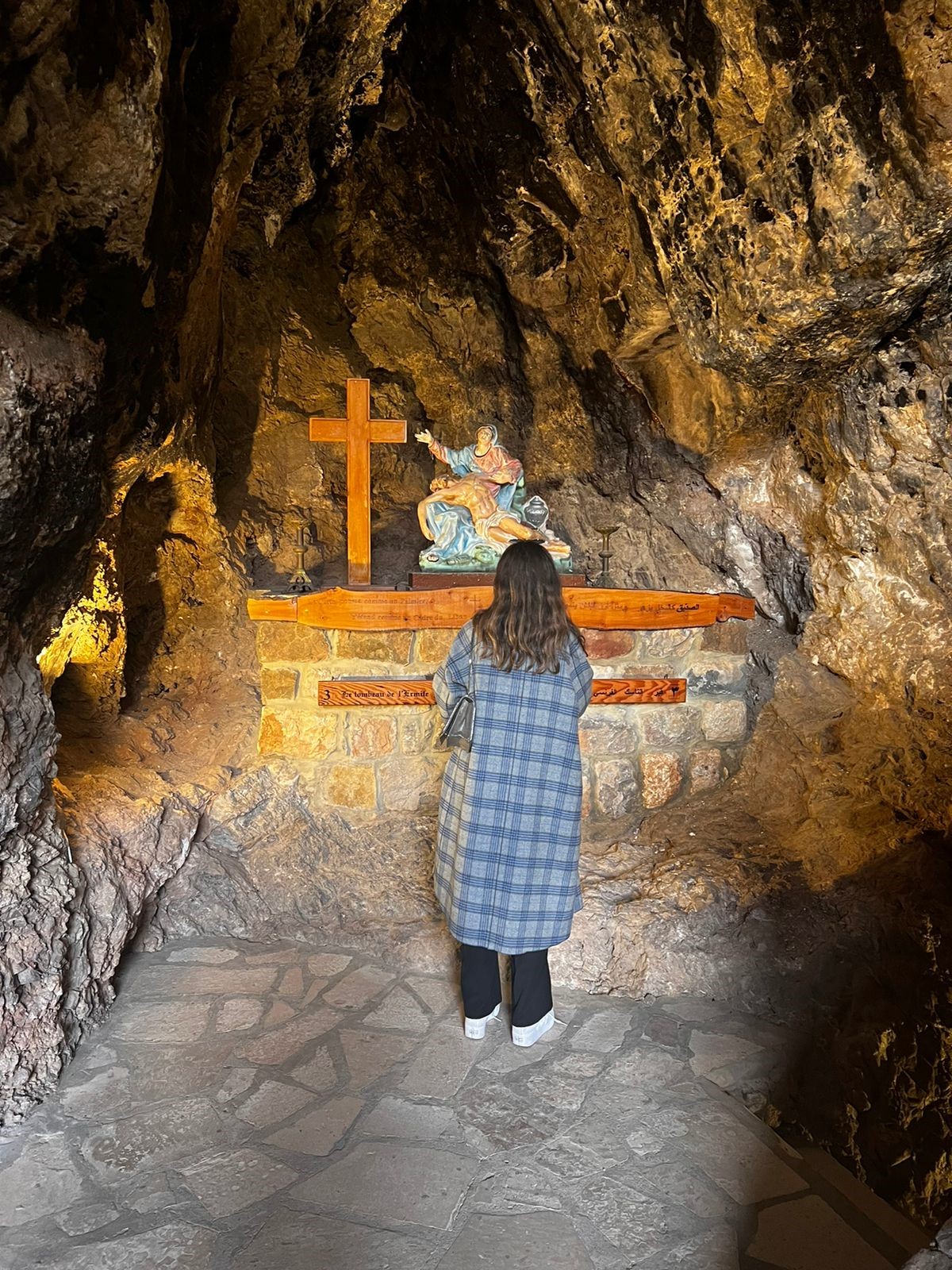 A pocket space in the ancient temple of Kadisha Valley wherein a priest was assassinated by the Turkish mandate, as history depicts

There we were at Master Saint Charbel’s church, we were sat and prayed, meditated for a while, I was in between worlds, a state of complete trance. Hours could have passed and I could have stayed with this benevolent fatherly presence blessing my heart, and I blessing his. Master Saint Charbel spoke to us, not in a language that the mind could hear, but in the language that only an open heart could receive. Then it was time to go, we left master Charbel’s with hearts filled with the energy of the blessed father, and as if fated to be like this, we made our way to the temple of Kadisha Valley. We were sat in the holy temple, but for me I was back home, a sense of deep familiarity eroded my very being, but accompanied with it a deep deep pain in my heart. The world froze for me, and I found myself meditating alone in one of the caves which were buried in a corner of the sacred temple. I felt that I was but a vessel for the divine energies which were guiding me, my very individual self-burned away, seized to exist… In the moment of here and now. And I understood that my path of awakening was paved light years away, in this powerful portal of light. I was something between a star being and pure consciousness, and in this moment I had formed a powerful portal of light which was yet to lay the energetic foundation of the civilizations which were yet to be realized, formed, created, by me, the source of all that is.

Today was a big day, but little did I know, that it would be the most significant day of my life. The night before we headed to Beirut, it was pouring rain, and when we left the house, the weather was bad, it was raining heavily and we didn’t know if we would be able to meditate in the outdoors. Somehow when we reached the seashores of Beirut, the rain stopped and the sun came out. And there she was, greeting us, the Beirut Rock, supreme creation of pure love and light. For me, being in Beirut, was an experience which was drenched in pain and sorrow, I was witness to Beirut’s highs and lows, I had experienced its dark days and had taken them in as my own, so you can imagine that meditating in my mother home, a home that caused me so much pain, was a challenging task to carry on. Nevertheless, with the help and support of my unbelievable star family, I did, we did together as one, we mediated, we served in this holy light portal, in an ideal weather and an incredible energetic power which enveloped this space. It was incredible and magical to say the least. On a personal level, In that moment I gave so much of my love and my light to my sweet Beirut, and I felt it giving me back, blessing me. We had a heart to heart me and my Beirut, and somewhere in between all illusions dissolved.

Here we came back to reality, and got in the car and drove towards the location of the Beirut Blast. Master guide Elena had a mission to complete in this location, she was headed to heal the souls lost in a time labyrinth in that location, but little did I know, it was my soul that needed healing most. I was in that explosion, I watched as my city crumbled in the blink of one eye, I watched as souls separated from bodies, and as a concrete building fell on me, and I watched as by some divine power, I was saved. Anyway, Master guide Elena in this moment, returned fragments of my soul to me, those fragments that got lost in the blast, that part of me that was afraid and traumatized, returned to me, and I felt it. Then we stood and watched a multi-colored rainbow appear from the Beirut rock, and land in the ocean shore near the place of the blast. It felt like Lebanon was blessing us, was thanking us for our service. It was a scene from a fairy tale movie with a truly happy ending. 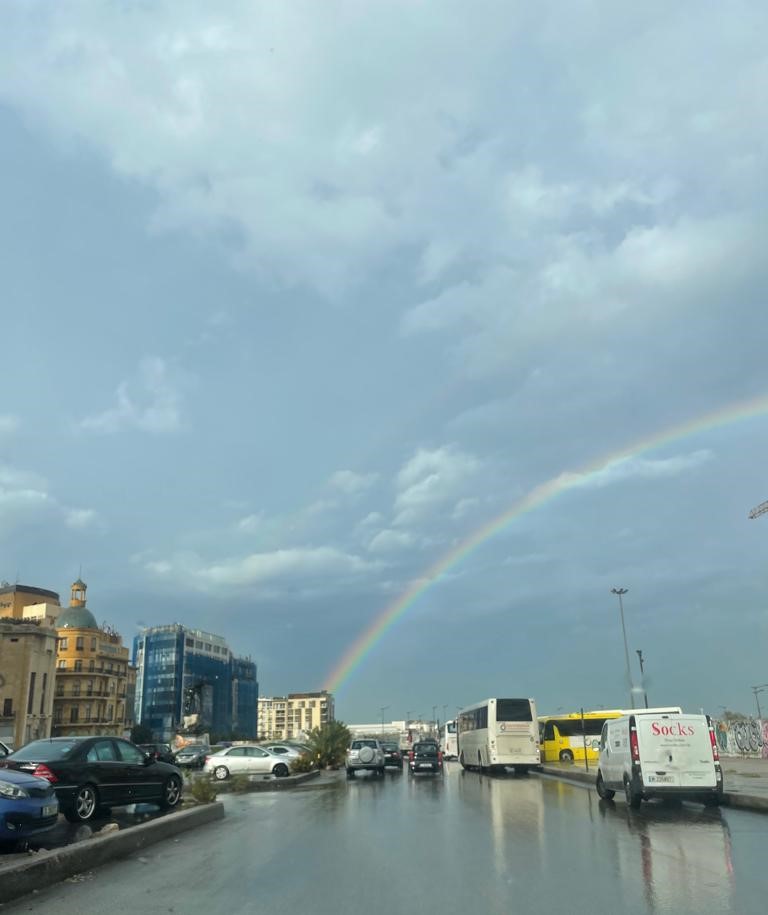 Multi-coloured rainbow appears after our service had come to an end.

I can honestly say that the Lebanon retreat was not for the faint hearted, it was a powerful retreat which shook each and every one of us to the very core. To return to the light, one must embrace the darkness,

And this was the retreat for me, a quantum jump, a healing process. It was the realization of all facets of my being, from light body to shadow self, to broken fragments and lost pieces of my soul, all coming together as one, merging together as one whole divine entity.

Information received during one of Master guide’s powerful meditations

My star family, my highest-self, my life force. I am in the denser world, and you are up above in the kingdom of light. The gatekeepers of the ultimate creator. I am your foundation, as above, so below. I am your core, in this layer below. The gatekeepers of the denser dimensions. With a heavy heart you divine ma sent me to the lowest of dimensions, to strengthen the links which form the energetic grid of which the whole is composed of. You sent me lifetimes ago mama, but to you it has been minutes. There is no time in eternity.

The energetic pyramids are joint systems. That joint system is a pattern, that pattern is fully interconnected. This is the universe. You holy ma, only capable of eternal divine light and love, sent me in service, with a heavy heart. Some of the systems were breaking down, and we were sent to restore them. Because a weakness in one joint will jeopardize the whole. In parallel with fortifying the current joints (ancient portals), we also must add new systems, to multiply them, and to secure them for the next gatekeepers of this world. New portals of light must be added in specific locations, it will be in accordance with the grid system of the universe. only then can we return.

You told me only to follow my heart, and someday my mission will be clear. I miss you, although you are in my heart. I yearn for the day where I return to a place where everything is, that layer beneath ultimate consciousness, beneath the highest layer, beneath source and eternity.